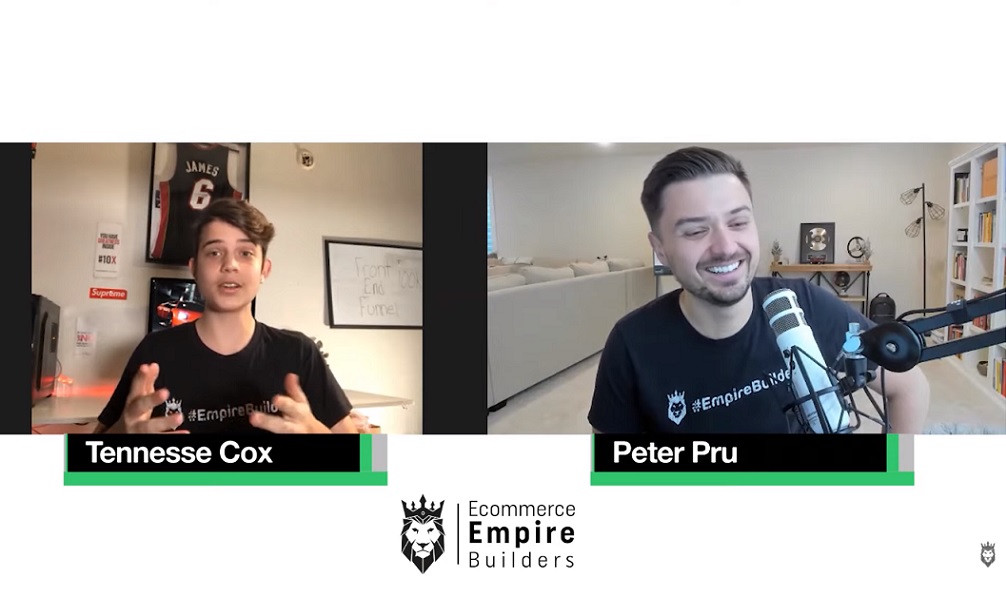 Empire builders, have you been wondering how to take your ecommerce dropshipping business to the next level? Well, the secret to success all stems from having the right mindset. While he’s only walked this Earth for the past 15 years, Tennessee Cox has already developed the mentality you need to succeed in the ecommerce industry. At just 15 years of age, Tennessee has already become one of our 50k a month students at Ecommerce Empire Builders, and I recently spoke with him during an Ecommerce Empire Builders review.

His mindset is incredible. No matter where you are in your own Clickfunnels dropshipping endeavors, you can learn something from this kid. I have been blown away by him and his story, and I think you will be, too. Check out everything Tennessee had to share about his ecommerce journey below.

Getting Started in Ecommerce Dropshipping

When I sat down with Tennessee, I asked him how he started his ecommerce dropshipping journey. Tennessee’s story is definitely not traditional. He told me that he actually started his first ecommerce store during the summer between his sixth and seventh grade school years.

Tennessee has always had an appreciation for the finer things in life. In middle school, he wanted the designer sneakers and backpacks his friends had. Like many kids his age experience, his parents told him if he wanted those things, he had to get a job and pay for them himself. So Tennessee started mowing lawns around his neighborhood for a little extra cash. He soon came to learn that manual labor was not for him.

To keep his funds up without having to do manual labor, Tennessee started searching YouTube for “how to make money online” videos. One of the first videos he found was about Amazon FBA. From that video, he started his first Shopify store for under $100. Tennessee actually had some success with his first ecommerce attempt. With his first store, he made a sale on the first day. He set up his shipping wrong, so he didn’t actually make any money on the sale. However, he was still stoked to get his first sale.

Tennessee ran his first store for about six months and then tried to sell it. Shopify contacted him and told him he couldn’t sell it. They also told him that he actually couldn’t even have a Shopify store because he was only 14 years old. After this little hiccup, Tennessee decided to take a break from dropshipping altogether.

During his hiatus from Shopify dropshipping, Tennessee decided he would try to make money as a social media marketer. He started reading tons of marketing books and took some online marketing courses as well. His go-to book during this time was Unscripted by MJ DeMarco. Tennessee soon realized that he could use his newly acquired marketing knowledge to create a profitable ecommerce dropshipping business.

During his marketing studies, Tennessee had learned about Clickfunnels dropshipping. He decided to search Clickfunnels dropshipping on YouTube, and the first channel to pop up was Ecommerce Empire Builders. Tennessee told me in this Ecommerce Empire Builders review  that finding our YouTube channel was a game-changer for him. He was hooked and watched every video on the channel that he could within a matter of weeks.

After watching our YouTube videos, Tennessee set up his own Clickfunnels account. He started watching our Six-Figure Sundays religiously. During our Six-Figure Sundays, we give away $25 each week. Tennessee won on multiple occasions. Then, he used the money he won to fund his Facebook ads and pay for his Clickfunnels bill. He started scaling his funnel and was generating around $2,800 a day.

After consuming everything he could on our YouTube channel, Tennessee decided to take the plunge and become a member of the Ecommerce Empire Academy and the Empire Builder Inner Circle. Then, Tennessee launched a new funnel and was soon generating $50,000 a month. Now his focus is on building a prominent brand within his niche.

Tennessee’s business accomplishments within the ecommerce industry are extraordinary, but what really impresses me about this kid is his mindset.

Tennessee started his ecommerce endeavors when he was in middle school. He stayed in the traditional school setting until the end of his ninth-grade year. Before the start of his sophomore year of high school, Tennessee convinced his parents to let him try a home school program. That would give him more time to focus on expanding his ecommerce dropshipping ventures.

I don’t know what you were doing at 15, but I certainly wasn’t thinking like this.

I asked Tennessee what his parents’ initial reactions were to his desire to stop going to school to focus on growing a business. Tennessee told me that, at first, his parents worried that he would miss out on the social aspect of traditional schooling. However, Tennessee told his parents that it was actually his social life at school that was really distracting him from achieving more with his ecommerce business.

Tennessee told his parents he wanted to surround himself with like-minded individuals that would push him to achieve more in the business industry. This is undoubtedly a powerful perspective for any 15 years old to grasp and then implement into their own life.

I asked Tennessee what his advice would be for those looking to get into the ecommerce dropshipping industry. His first piece of advice is to disregard what the naysayers have to say. Instead, surround yourself with like-minded individuals that are passionate about their own business endeavors.

At the young age of 15, Tennessee has already come to realize that when you’re passionate about your work, it’s no longer really work at all. This is definitely a powerful mindset for a 15-year-old to have. Each of us, regardless of age, can implement this way of thinking into our own lives, too.  Having the right mindset is a crucial element of success, and you can read more about what Favour Johnson, another dropshipper, has to say about mindset in his Ecommerce Empire Builders review.

Are you ready to take the plunge like Tennessee did and become a part of the Ecommerce Empire Academy? If Tennessee’s Ecomerce Empire Builders review convinced you to become an ecommerce entrepreneur, don’t wait. Sign up for access to our exclusive free webinar today. Be sure to check our YouTube channel for even more free resources and insights into the ecommerce industry. Your empire starts now! Tagged : Clickfunnels / dropshipping business growth / ecommerce dropshipping / ecommerce empire builders / ecommerce empire builders review