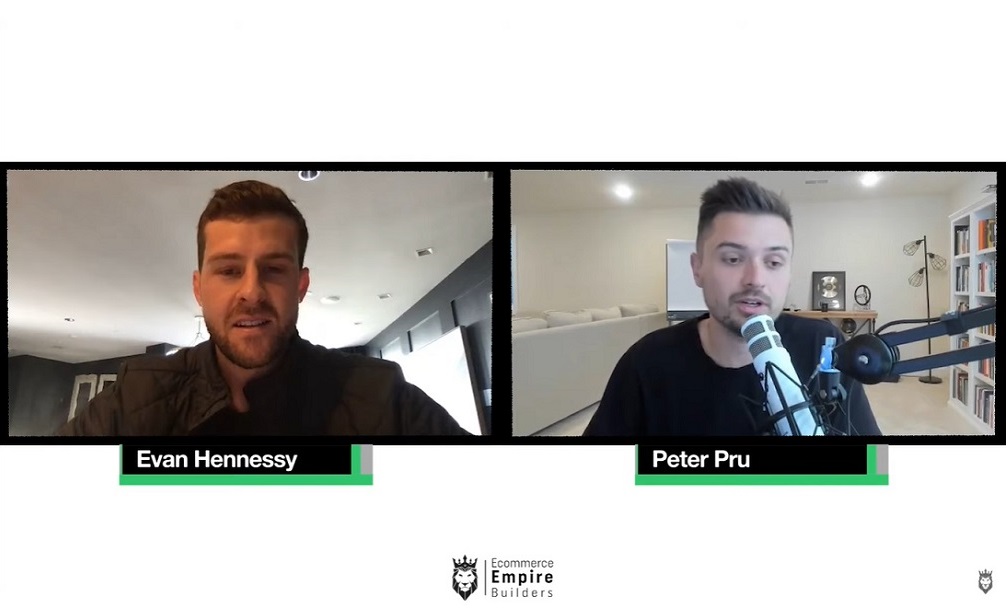 We’re always happy to see our students succeed with dropshipping. This is exactly what we saw with Evan Hennessy, an Ecommerce Empire Academy student, as he grew his business from zero to nearly six figures with the help of sales funnels. Evan began with a simple struggling Shopify store and Facebook ad campaign. But after making the switch to sales funnels, he reached that $90,000-per-month mark.

Evan got into ecommerce back in 2016 when things were a lot simpler, including Facebook Ads. All those campaigns entailed was placing an image on the right side of people’s feeds to start making money. With some early success, Evan sold his ecommerce business a few months later. Then, he got involved in digital advertising.

Working for a digital ad agency, Evan started with a Shopify store and relearned Facebook Ads. Around March 2018, he found himself struggling more, as he lost a considerable amount of money through Facebook ads. A year later, he began incorporating some of the practices he learned as an Ecommerce Empire Academy student. He was soon able to increase profitability and work in dropshipping full-time.

Evan’s first sales funnel wasn’t a huge success, so he began to tweak it by adding more upsells. What would really help boost his success would be the addition of a continuity piece. This strategy enabled him to reach that $90,000 point as he also tested new products.

Evan’s revenue comes from two primary sales funnels: one offering “free plush shipping” and another with a discount offer. Both sales funnels are in the same niche and under the same brand. While he’s found it harder to make money with the “free plus shipping” offer and intends to find ways to improve upon this funnel, he has found that continuity has gone a long way in helping him grow.

With the help of his continuity piece, Evan has been able to bring in about 240 customers who provide regular recurring revenue.

How Continuity Has Worked for Evan

When hooking those subscribers, Evan offers a two-week trial along with a bonus product upfront. This is followed by a $34.95/month subscription, with a conversion rate of around 10 percent. (A 10-percent conversion rate isn’t terrible. But some tweaks could be made here, including upselling the full-price subscription first. This is crucial because some people want to jump right into that subscription from the start. If they say no to that, then we’d recommend a downsell followed by a free trial offer. We rarely use downsells and try to avoid them as much as possible. But in cases like this, they may be appropriate.)

The key element here is the continuity piece, which will help Evan in the long term. He might lose some of those 240 subscribers at some point. But some will still stay with the subscription and provide that regular revenue stream. As he goes on to attract thousands of subscribers, that revenue will only increase as more people commit to the subscription.

How His Deep Discount vs. Free + Shipping Offers Work

In his “free plus shipping” offer, Evan typically charges around $10 for one unit with quantity breaks. This translates from around $10 per customer acquisition to $12-15 with upsells, with the understanding that the continuity will help compensate for it. As he scales, his cost-per-acquisition increases. This is what we’d expect to see as dropshipping businesses expand to broader markets or exhaust the ones they’ve been targeting.

At the same time, Evan offers a discount for a product that typically goes for around $40 to $50. He’s also been testing a product that costs around $130. He started his campaigns with cold traffic as he also tests retargeting, but he had yet to scale when we’d talked with him.

In an effort to grow his business even further, Evan has outsourced some work to an email marketing team and a virtual assistant who works for him 20 hours per week. His email marketing consultancy agency has managed to help bring in almost $5,000. His email list consisted of around 30,000 people when we spoke. He hoped to continue to increase his email marketing campaigns’ profitability.

When it comes to email campaigns, we recommend that every Ecommerce Empire Academy student try to build those email lists through affiliate campaigns. Alternatively, you can rent out the email list or work with joint venture (JV) brokers in the same niche. You can easily build your email lists in these ways without the need to spend a lot more money. Just send more weekly emails in a cross-promotion. However, it’s best to avoid working with a JV broker unless you have an email list of at least 20,000. JV brokers want a massive list that makes it worthwhile for them to promote their products.

What was kind of surprising to us was that Evan saw a 10-percent rate consistently across his sales funnels when it came to continuity. Regardless of what he was doing with his sales funnels, 10 percent was the static number he seemed to be seeing.

Historically, we’ve seen a higher rate with “free plus shipping” offers, with the caveat of a higher turn rate. This is because while you draw in more people with these offers, more people are likely to turn away as a result. These offers are especially popular because they evoke some excitement. Many people who come across that “free plus shipping” deal make more impulse purchases.

One final piece of advice that Evan shared based on his success was that it’s best to look at your business in the long term and focus on building your brand gradually, which is precisely what we encourage. It’s best to avoid trying to make quick, easy wins. Instead, try to build on opportunities that will garner long-lasting success.

Learn From the Pros as an Ecommerce Empire Academy Student